Essay and review on the book 'By the Glow of the Jukebox: THE AMERICANS LIST', by Jason Eskenazi, Red Hook Editions, 2012, posted on 18 July 2013 in ICP Library Blog here.

"WHAT IS YOUR KNOCK-OUT FAVORITE IMAGE OF THE 83 OF ROBERT FRANK'S THE AMERICANS?" Straight and spooky question, right? And engaging enough, to start a funny, sometime intellectual, but most important, passionate journey through the various answers of so many photographers around the globe, all collected in a book. This is ‘By the Glow of the Jukebox: THE AMERICANS LIST‘, published by Red Hook Editions in 2012 by its founder Jason Eskenazi. Queens based photographer and Guggenheim recipient himself, Eskenazi in the emptiness between photo-projects found in 2009 job as a guard for the 50th anniversary retrospective Robert Frank’s ‘Looking In’ at Metropolitan Museum of Art in New York: “The Americans – explains him in ‘The List’ - is probably the one book that connects more photographers than any other, so while guarding the show I saw many of my photography colleagues enter. Between clicking visitors on my hand-held counter, I began asking them what their knock-out favorite image was. I discovered that many of the answers revealed much more about the photographers themselves.”

But it was only after quit the Met that Jason – concept book already in mind – started to invite photographers friends first, then colleagues, to submit by emails an essay about: “What’s your knock-out..? Why? Where are you writing now?”. The bait was took in two years by 257 photographers: “I wanted to include photographers young and old who were dedicated to their craft” he told me, kindly including myself too in the book (after we met when ICP sent myself, just docked by chance in NY, to assist his ICP class in 2009) with my choice of ‘U.S. 285, New Mexico‘. “It didn’t matter if they were famous or not, but I had to bother them a lot until they finally wrote something“. Anyway, with so many guests ‘whether soaked in fame (like Joel Meyerowitz, Mary Ellen Mark or Anders Petersen) or soaked in rain’ as Eskenazi writes, ‘The List’ is a book more about photographers than photos. No images, 85 recycled paperpages with an elegant red bookmark, it is like a thin notebook companion piece to the original book.

And lets talk a little of ‘Some thoughts of the photographers and their choices‘, as titled at page 11. First, not an easy job for many: “It’s like breaking apart a string of pearls and saying this one is my favorite” says Dan Sheehan, but choosing in the end ‘City Hall – Reno, Nevada'. “Request of a sadist Jason” said Phillip Blenikisop, pointing then last photo of the book ‘U.S. 90, en route to Del Rio, Texas‘, with Frank’s exhausted wife and the son in the car. Right this image results the absolutely most voted in ‘The List’: “The need to be with them - writes Christopher Anderson, about this same choice - and to be on the road, doing his work. It is something that I understood immediately“. His agency colleague David Alan Harvey instead, with ‘Charity Ball – New York City‘ remembers: “[When I was a teenager] all the photographers I saw needed something. War photographers: war; landscape photographers: Yosemite; fashion photographers: a glamourous model.. What I liked about Frank and in particular about the Americans was that he did not need anything..“. 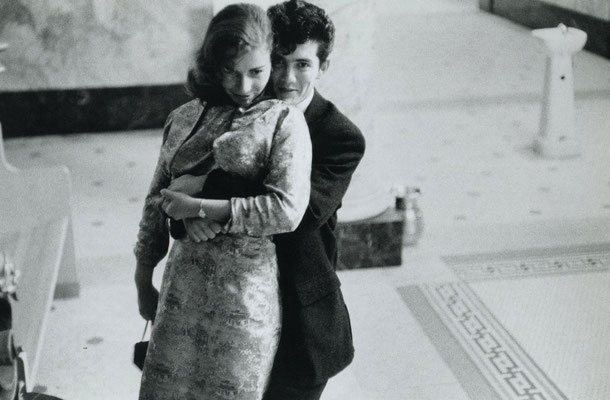 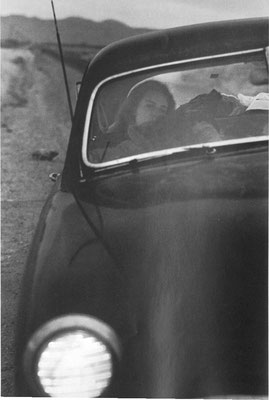 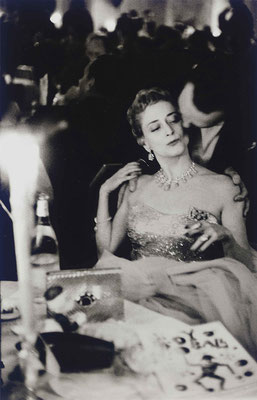 Spiritually, Lisa Quinones completes this, talking of the out-of-focus young lady of ‘Movie Premiere – Hollywood‘: “When I was starting out, I definitely felt this pressure that you weren’t a ‘real’ photographer unless you were covering a war, or the big news of the day. Frank reminds me that really, in the end, the big news of the day is how the real people live”. And with no doubts, over the story of the man Robert Frank, ‘The Americans’ (1958) is about U.S. people, shown as was not ever been made before, in a contrasting melting pot frame of growing richness (post World War II victory), segregation, patriotism, religious and social class divisions, making this Frank’s vision initially described like ‘un-American’. “To Robert Frank it was not normal. He saw all of this from the perspective of an immigrant – an eye-opening experience that must have been like a slap in the face..” tells Ergun Çağatay, choosing ‘Hollywood‘. 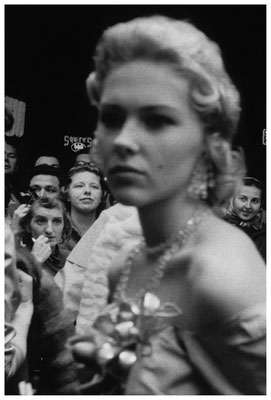 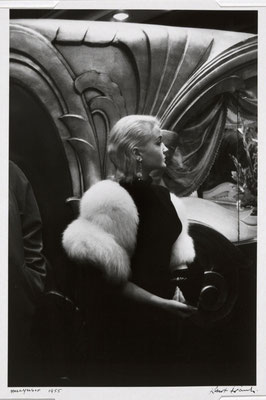 On the other side Erin Trieb, talking about the abstract ‘Barbershop – McClellanville, South Carolina‘ photo, says: “When I look at Frank’s silhouette in the frame, I don’t see a Swiss photographer, but a neighborhood kid who is trying to get a better look inside..“. An immigrant and a born-in-the-neighborhood kid look, isn’t perhaps the two sides of the American identity coin ? “In my Midwestern American upbringing I had been taught not to stare at people. This image taught me that becoming a documentary photographer was about not looking away” marks John Trotter, about the iconic tram full of humanity of ‘Trolley – New Orleans‘. And just about the relation between people in this ‘looking’, is Claudius Shulze’s essay: “Photographers should be honest and reference the relationship between themselves and their subjects. [Not like National Geographic's colonial, masculine tradition - as Claudius writes - ] Robert Frank’s photograph is absolutely about the inequality between the photographer and the protagonist“. Shulze’s choice is right the one of Robert Frank himself: ‘San Francisco‘, where a pretty disappointing black couple on a green just discovers to be subject of Frank click. 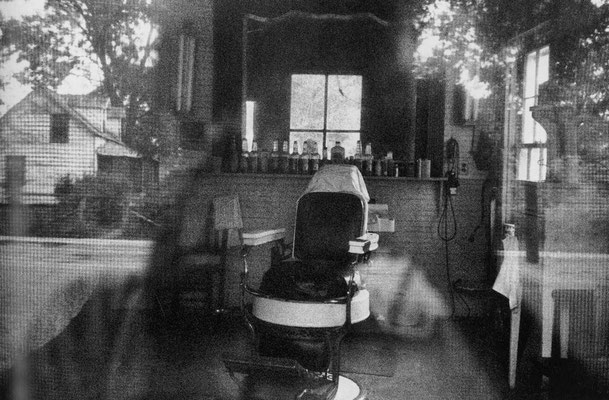 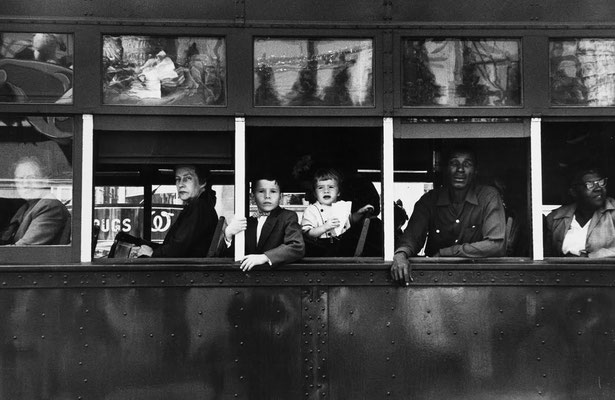 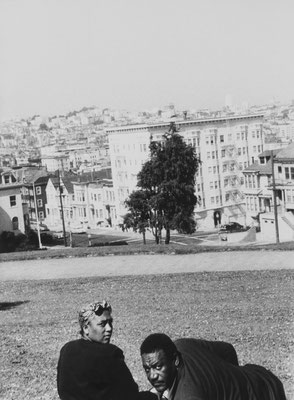 And over Jason’s personal favorite (‘Men’s room, Railway station – Memphis, Tennessee‘), and so many more interesting essays, ‘The List’ is full of insights  about ‘The Americans’ or photography in general, personal memories, as in some cases this book strongly influenced someone’s life. Rivers of ink have been fairly wrote in years about ‘The Americans’. In my opinion, if you want a different understanding and approach of this seminal work, leave for a moment at the bookshop the thick intellectual critique volumes, and take a look on the tales of all the photographers, thanks to Jason Eskenazi, in ‘The List’. Also a way to make a voice for this very big, often in need of support, community (especially the ‘soaked in rain’ side), differently influenced by Frank’s book or maybe from just what it can represent: “Everything that can not be bought in a store. Grace, dignity, beauty, love, romance, sensuality, pride, strength, courage, mystery and cool..” as Peter Turnley says, about the motorbikes couple of ‘Indianapolis‘, writing from that unforgettable corner of New York where I lived for more than one year, Harlem. © Emiliano Cavicchi 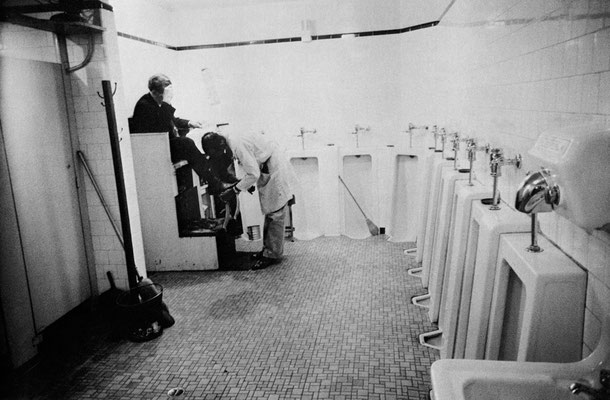 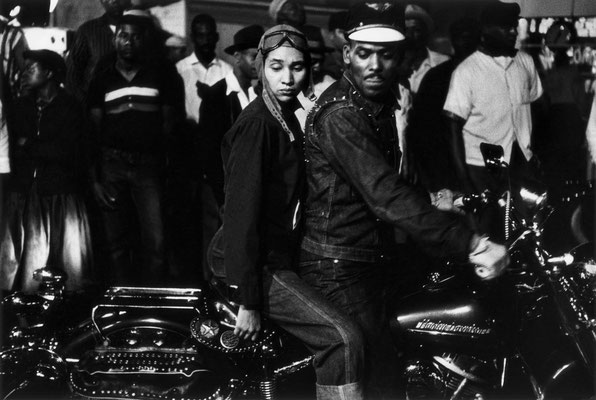 back to -> 'ICP Library Blog' index