- On March 10, meeting students of Liceo Virgilio, high school of Rome, for a panel talk of my work. Image courtesy S. Fernandez

- My essay, 'If you even dream of beating me you'd better wake up and apologise' on Photography and Sport, on Euro 2016 football games, the Paralympic games 2016 in Brazil, by the eyes of the visually impaired Brazilian photographer, and then paying homage to the Greatest, Muhammed Ali, just passed away this summer. Original post on ICP Library Blog, here.

A view on beautiful Villa San Michele, in Capri island in Italy, built in 1887 by Swedish physician Axel Munthe, and site of famous Italian gardens has been published on Swiss magazine in French Language L’INFORMATION IMMOBILIÈRE, N°121 - Automne 2016.

Full 12 pages with the 14 photographs from the magazine possible to be seen in Features & Publicatons page here, or in slideshow here https://issuu.com/spg_/docs/information_immobiliere121/102

- The assignment Controlling Energy: the task of the Ural Centre of Energy Efficiency and Environment has won the Honorable Mention in the 'Environment' category [click] of 2016 MIFA - Moskow International Foto Awards.

- My essay 'The Good singing hurts, but with the lighs on it's less dangerous', on Photography and Music, tracking relations on Grunge music, especially NIRVANA band, but also about Classical, Ballet, or Spanish Flamenco guitar and his deep singing and dance, has been published on the International Center of Photography Library Blog.

The Italian translation of the essay is now available, with all the other articles, in the website.

The project has been developed by Russian RIA Novosti press-agency, involving 20 photographers from each country of past 2013 Saint Petersburg G-20, called in Russia to produce a story on their choice on G-20 themes, to publish then a catalouge and exhibitions for the summit and over.

My story representing Italy 'Controlling Energy: The task of the Ural Centre and Energy Efficiency and Environment'.

- New essay 'I am the Station night owl tonight, and the Sky is not the limit' on on Science, Exploration and Photography, from ancient time to modern space era, is out published on the International of Photography Library Blog, this February 6th.

Special thanks goes to the New Zealand Antarctic Heritage Trust, not-for-profit organizasation in charge for the conservation of historic sites in Ross Sea region of Antarctica, who permit the publication of their 'Lost Roll' discovery.

- Italian cultural association 'Terzotropico' has publicized the results of the auction at the 'Alliance Française Bologne', Bologna, Italy, on November 27th, 2014. I am very glad my photograph 'Sotto il cielo di Marrakesh' (Under the Sky of Marrakesh) has been purchased, together with different selected works from the almost one hundred artists/archives originally inolved. All the incomes will be devolved to Terzotropico association, in order to support the works of young Malian photographers in the fundraision project 'Photographes Au Mali'.

A photo of mine, from 'A Journey to Morocco' series [click] is in the Group-Show and for the Auction. Variorus professionists and important archives then, such Ernesto Bazan, Francesco Cito, 'Archivio Mario Giacomelli', 'Archivio Fotografico Cineteca di Bologna', and artists like Martina Merlini, Agim Sako, are included with their works, in collaboration with National Italian Photoreporters Association ‘A.I.R.F.’, which I am a member, and 'Républilque du  Mali', 'Conseil Des Maliens d'Italie', 'Africa e Mediterraneo'.

- My essay 'Luigi Ghirri, the Absolute Fascination of the Image', on the work and recent exhibitions and the 2012 first book reissued of the Italian photographer Luigi Ghirri, has been published on the International Center of Photography Library Blog (on their link here) this July 14.

On-line on this website in the ICP Library Blog section, at this link.

- Book, and catalogue of the exhibition, of the recent RIA Novosti project 'THE RUSSIAN MOMENT - 20 world's leading photographers expedition in Russia, July 2013' involving myself, with project 'Controlling Energy: The Task of the Ural Centre for Energy Efficiency and Environment', and 19 more photographers.

Photo-gallery with extracts from the book here.


- Project 'Controlling Energy: The Task of the Ural Centre of Energy Efficiency and Environment', for RIA Novosti G20 project 'Russian Moment - 20 world's leading photographers expedition in Russia, July 2013', has been reported on the official 'UCEE' website [in English / in Russian].

With photos excerpts, a video-interview on my work (in English) and an article about (in Russian/Cyrillic), on Russian daily newspaper Moskovskiye Novosti (Московские новости, 'Moscow News'):


- Published here my essay from the book 'By the Glow of the Jukeboxe: The Americans List', compiled by Jason Eskenazi, on my own favourite photograph from Robert Frank's 'The Americans': 'U.S. 285, New Mexico, 1955' [click]

Organized by Russian news agency RIA Novosti, project includes twenty photographers of every countries of the current G-20 in St. Petersburg, chosing to follow twenty stories in Russia this summer. My story: "Controlling Energy: The Task of Ural Centre For Energy Efficiency and Environment"

- In Russia, under assignment for Russian Ria Novosti news agency.

- Honored my essay 'The Americans List and some things you cannont buy at the store', on the book "By the Glow of the Jukebox: The American List" by Jason Eskenazi, having been published on the International Center of Photography Library Blog (on-line now at ICP Library Blog link) this July 18.

It is possible to read it here in the section ICP LIBRARY BLOG , where I will post this and future contributions I will write in time.

The group show is presented by The Centre for Research in the Arts, Social Sciences and Humanities [click] of the University of Cambridge in association with United Photo Industries of New York City. More info at this link.

- One image from "In the Light of a Far-Away World" [click] project chosen by beautiful American 'FotoVisura' photo-magazine and community as Photo of the Day, October 11, 2012. On line today in the main page or in the Archive of the web-site [click], or at the link with full reportage [click].

- One reportage on the phenomenon of the urban gardens in Rome, has been published on the Italian weekly magazine 'Left', September 1, 2012 issue n. 35.

- 35 photographic portraits of the actors and actress of the Walter Manfrè's play 'La Confessione 2012' for Teatro Valle Occupato in Rome will be exhibit as one single installation in the foyer of Teatro Valle Occupato, Via del Teatro Valle 21, Rome, Italy, for the during of the theatrical show, from May 3rd to 8th [click].

The project has been published and quoted in the Italian art web-zine 'Pensieri di Cartapesta', with a review of the Manfre's show by Fanny Cerri [click].

- Published one reportage on the last life-styles tendencies of the city of Rome in Italy on March 2012 issue n. 103 of Belgique version of monthly magazine 'Elle'.

- Selected one image from the Europe project in the group-show of the internatıonal contest 'Urban 2011' by Italian photography Association 'dotART - Punti di Appartenenza' of Trieste ın the ICTP - Centro di Fisıca Teorica (Center of Theoretical Physics) of Trieste, Italy, from October 14to 28.  [click]

- Published one portrait of the Palestinian fashion designer Jamal Taslaq for the French magazine 'XXI'. Online on the 'XXI' website: [click] 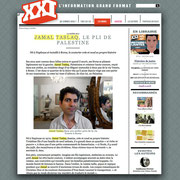 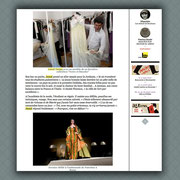 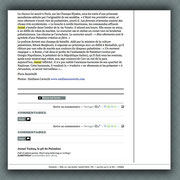 - The slideshow 'Europe: Images from the Lands of the Old Continent', from the on-going project 'Europa', will be shown during the first international photography festival in Turkey, Bursa Photo Fest, October 15-23th, in Bursa city.  [click]

- One image from the on-going Europe project has been shortlisted as finalist in the British contest 'CIWEM's Enviromental Phtographer of the Year 2011'.

- One image from the on-going Europe project has been selected in the international contest 'Urban 2011' by Italian photography Association 'dotART - Punti di Appartenenza' of Trieste for a group-show in Krakow, Poland, in the club and cultural center Lokator from August 18 to 24.  [click]

- In the Light of a Far-away World project has been shortlisted as finalist in the prestigious Px3 Prix de la Photographie Paris 2011.

- Al Huda, Images from a Roman Mosque project has been selected in the next Gelato! Art Salon for a double photo-slideshow:

- The Morokko 2007 series, which has won the Honorable Mention in the National Geographic Contest 2009, has been published with an article, in Italian, in the on-line magazine ArsEtFuror.  [click]

- Member associated of the Italian National Association of Reporters and Photographers A.I.R.F.

- One image from the Morokko 2007 series has won the Honorable Mention in the National Geographic Photography Contest 2009. The photo is published in December issue of National Geographic Italia magazine. On internet in the gallery of the winners.  [click]

A second image from the same series, with a Berber woman in old part of Essaouria town, has been published on-line in the NG 2009 Contest short-listed section 'Persone' (People). [click]

- New exhibition Across the Ocean: some European visions will start Saturday 03 October until the end of the month, during the Brooklyn Artillery Fair in Castle Braid, 114 Troutman Avenue, Brooklyn, New York City.